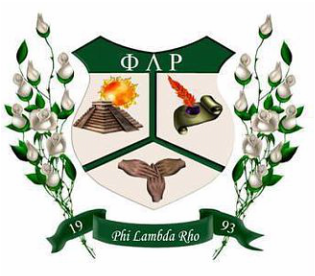 Phi Lambda Rho originated as the club "Flor de Aztlan" at Cal State University, Stanislaus in 1993. At the beginning, Flor de Aztlan was established as a support group for women pursuing higher education. After some time, the members of the group, wanted to receive more recognition and decided to transform the club to a sorority. Phi Lambda Rho, which reads "Flor" in Greek, was adopted as the official name of the organization. Flor de Aztlan adopted the principles of Academic Excellence, Sisterhood, Philanthropy, and the Promotion of the Chicana Latina Culture.

Phi Lambda Rho was established at California State University, Northridge as the 5th chapter of this organization in May 12, 2007. Phi Lambda Rho continues to follow the traditions that founding mothers worked so hard to achieve. Not only do the sisters maintain the integrity and purpose of the organization by upholding the four objectives, but they also develop character,
commitment, and the responsibility necessary to be leaders. The organization remains small in numbers, but it prides itself in the quality of its' members.
Powered by